ncrtorial is a tutorial I made from 2018-2019 that deals entirely with game elements that are not documented in the pre-existing built-in tutorials, such as DC2 magic walls, Magic Balls, and white keys. It uses a sidebar design by Eizzoux that displays white keys and the four extra Emerald Mine Club keys.

I kept holding it off because I wanted to add more levels to it, but never felt motivated to actually work on any. Well, 3 years is enough waiting to see if new levels spontaneously manifest out of thin air, I think.

I may update this set later to include additional topics like starting inventory, but no promises. 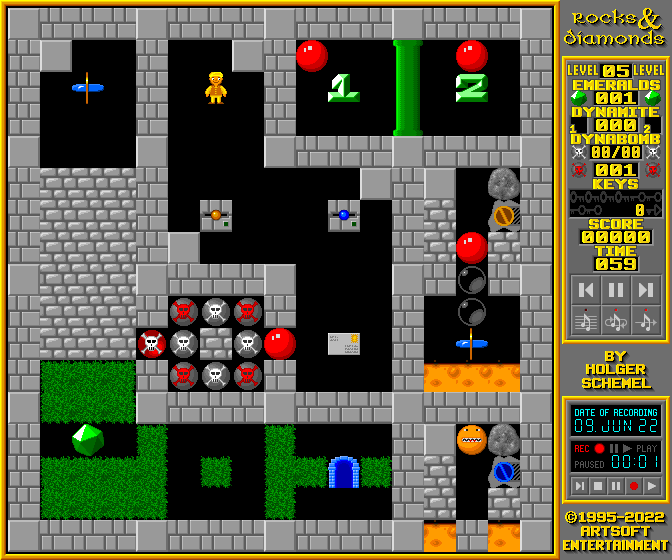 Permission is granted to bundle this levelset with future versions of Rocks'n'Diamonds.
Top

And I do like the idea of adding this as a third tutorial level set, to have those other game element covered!

However, I think it is quite a bit (too) hard for a level set that is meant as a tutorial (for beginners), or what do you think? Shouldn't it be easy enough to just play through it without too much thinking and without too much skills, or am I just too bad at it?!

I think it should be fine. Niko Bohm's tutorial has some pretty hard puzzles in it, like "Snap It!", "Let There Be Light", "Growing Walls", "I Love Penguins", and "Supaplex III" (in my opinion), and I think the levels here are mostly less difficult than that. In this levelset, the difficulty peaks around "More Keys", level 3, and goes down from there. You can also choose to think of this as an "advanced" tutorial, since it skips the basic concepts and only covers topics that the other tutorials don't.
Top
Post Reply
3 posts • Page 1 of 1