I'm not sure should I keep these sprites for custom elements in my R'n'D 64 (64x64px game gfx), especially for REF elements.
Maybe this looks prettier, but those are too detailed so small details are too hard to see in editor. What do ya think? 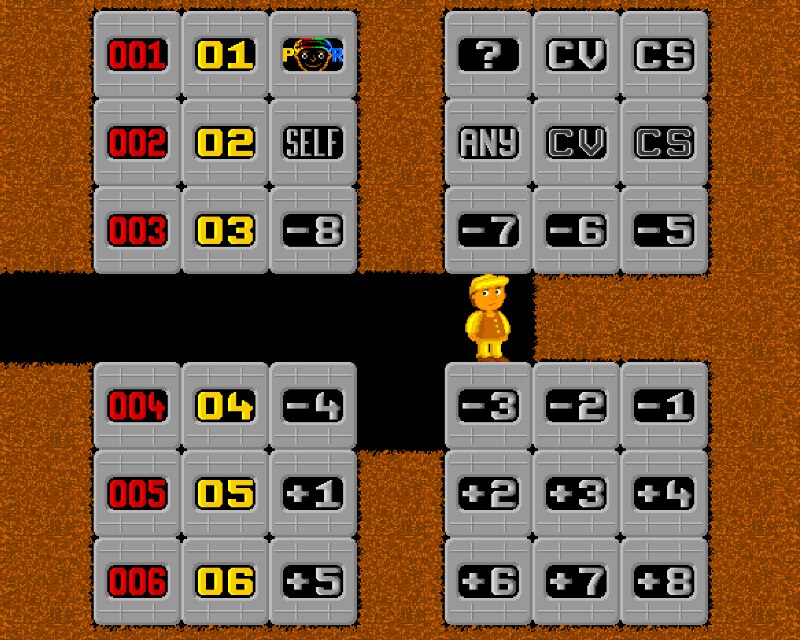 First of all: Your 64x64 sized version of the classic graphics look amazing -- I have to say this again.

Then to your question: If your goal is creating a 64x64 graphics set, I think you should keep them. If needed, you still can create dedicated graphics for the level editor (using ".EDITOR") for certain CE/GE/REF elements. In this context, also remember (not sure if you already did that) that you can not only use 16x16 sized tiles for the editor palette, but also larger graphics (like 32x32 or even 64x64). For such sizes, it would be great to have these higher resolution graphics available!

BTW: Did I ever post my experimental graphics set for tablets that uses only (at least I think so) 32x32 sized graphics in the level editor? (And it also uses the "palette window" feature, to see a larger number of elements to select from in the playfield area while selecting a drawing element in the editor). Not sure at the moment... (my six-year-old daughter uses this set when "painting" levels in R'n'D on an Android tablet)...
Top

I noticed how illogically fast the zonks are rotating while being pushed. Zonk spins rapidly even when it at least could rotate by 180 degrees per one block instead of 1 or 2 full spins.
Just a little comparison in very slow mode

Holger wrote: ↑Tue Feb 20, 2018 1:17 pm ...also remember (not sure if you already did that) that you can not only use 16x16 sized tiles for the editor palette, but also larger graphics (like 32x32 or even 64x64). For such sizes, it would be great to have these higher resolution graphics available!

Yes, I'm using 32x32 icons for editor (just copying most of them from original graphics but with some changes
)

Holger wrote: ↑Tue Feb 20, 2018 1:17 pm BTW: Did I ever post my experimental graphics set for tablets that uses only (at least I think so) 32x32 sized graphics in the level editor?

Actually, I don't know, maybe you did but I missed it, not sire

Unlike original R'n'D, R'n'D 64 will mostly have the same animations but smoother than before, and also some more animations original game never had.
Here're some examples:

Re: (WARNING, heavy GIFs!) R'n'D 64 - Test of some additional animations

I think it's better to upload to artsoft.org (use the 'attachments' tab) -- then your post is internally complete and will last as long as the forum lasts, instead of one day being a sad broken thing with dangling links to some long-dead image repository site...
Top

(Same comment applies to your original post here & the other comment. The RnD forums are full of half-broken posts, as the forum lasts a lot longer than random fly-by-night repository sites. Make your posts self-sufficient.)
Top

Unfortunately, all those links are broken (as in "this document is only available to its owner" -- permissions problem?).

I think it's better to upload to artsoft.org (use the 'attachments' tab) -- then your post is internally complete and will last as long as the forum lasts, instead of one day being a sad broken thing with dangling links to some long-dead image repository site...


Two of them are too heavy, so I couldn't add them as attachments, so I left links to them instead of pics themselves. Does that work right?

Oh, thanks a lot, Holger! But I still have problems with file attachments.

I attached 4 GIF files, placed where I need them to and... They're like... duplicating. You can now see on that reply up there I placed these GIFs, but in the end of reply there're three more GIFs, which are the same as these ones, but most importantly - if I try to edit reply, I'm checking the attachments and seeing only two of them listed. Clicking on Preview makes only ONE of them being visible, all others are "inavailable". I'm just confused how the attachment system works here

I'm not sure if I should keep this new idle animation for robots. Maybe it could look... interesting? I'm not sure. Maybe it's actually better than normal robots' animation, maybe not.

Especially, I think they really capture the "spirit" of the classic Emerald Mine and BoulderDash style graphics, which is always a problem with "improved" graphics, I think. With your new graphics, I like the limited color palette look, and the pixel style animations of the enemy-to-diamond transformations -- well done!

But now to the new "robots": I think that the blinking eyes are quite fine as an addition/improvement over the 16x16/32x32 animations, but I'm not sure about the "antennas" -- I do like the classic "moving antenna" look of the robots, and I personally think that it is a detail that should be kept; the new animations look a bit too static to me when compared to the quickly moving antennas of their original conterparts.

I think that most recent animation looks awesome, and haven't looked at other bits.

Regarding the antennae: maybe they could be zapping and waving? :)
Top

I didn't redraw all the textures, I was working on resizing and reordering all the menu last time, editor and other screen stuff. I just took double sized original textures and used for more comfortable ordering all movable graphics, buttons, symbols, texts and etc. Then I'll redraw the textures. It looks almost identical with some minor differences I can't really get rid of. I'll try to list all of them (even when you know few of them already): Here're some screenshots: 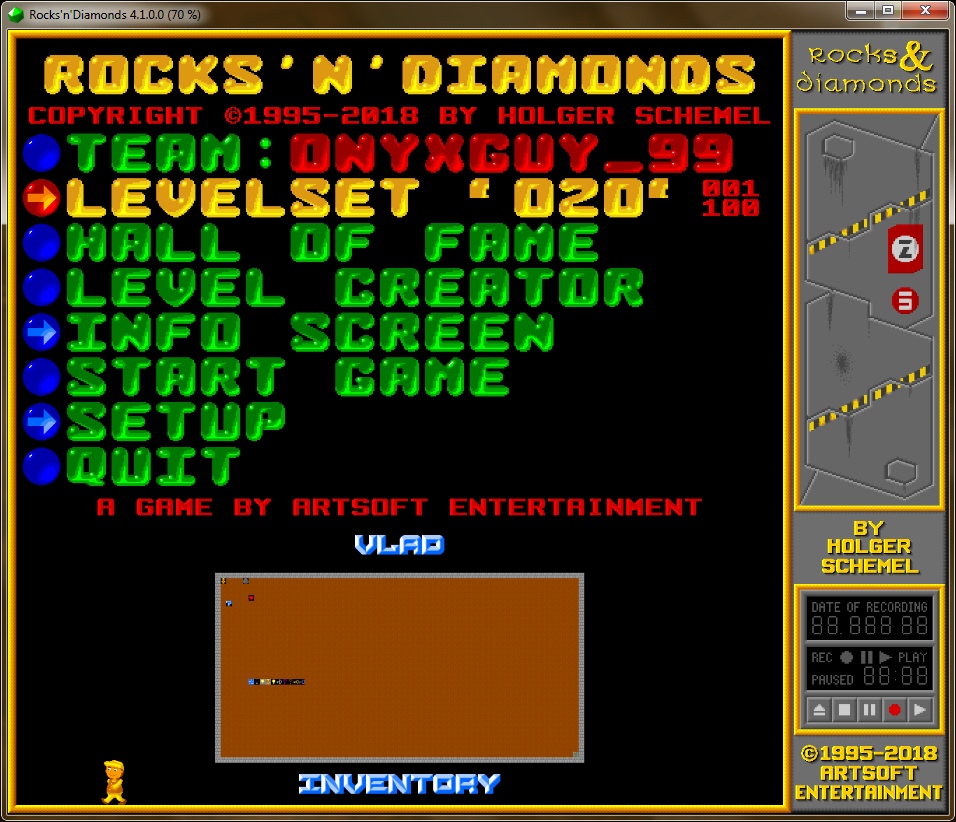 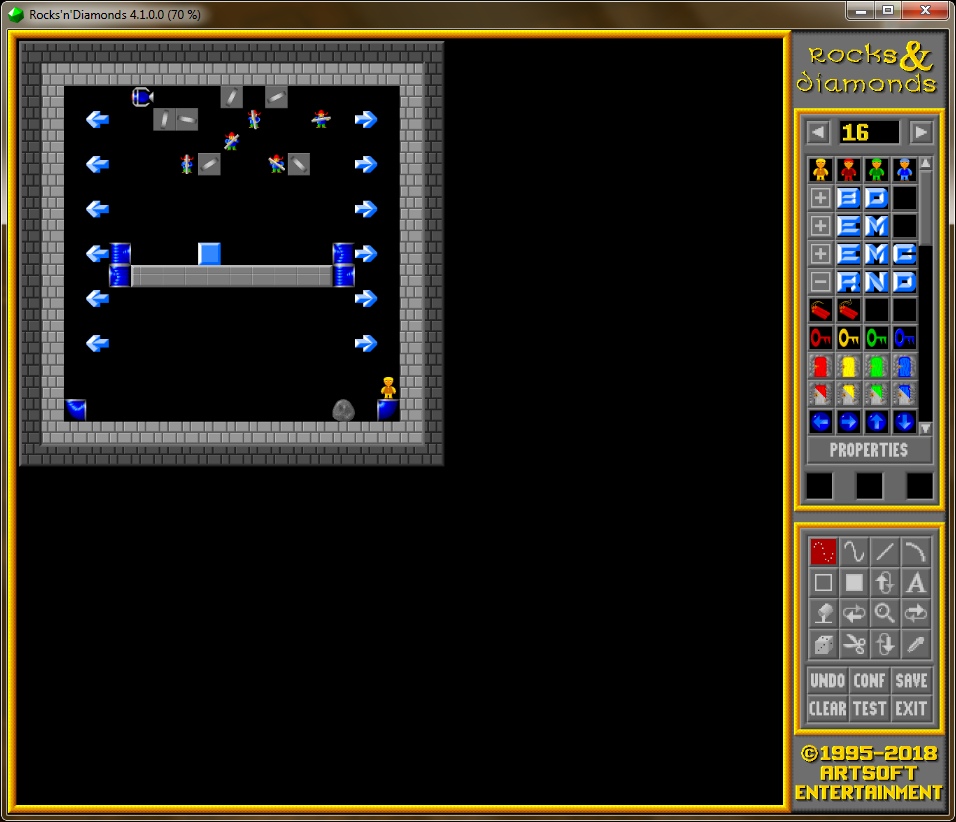 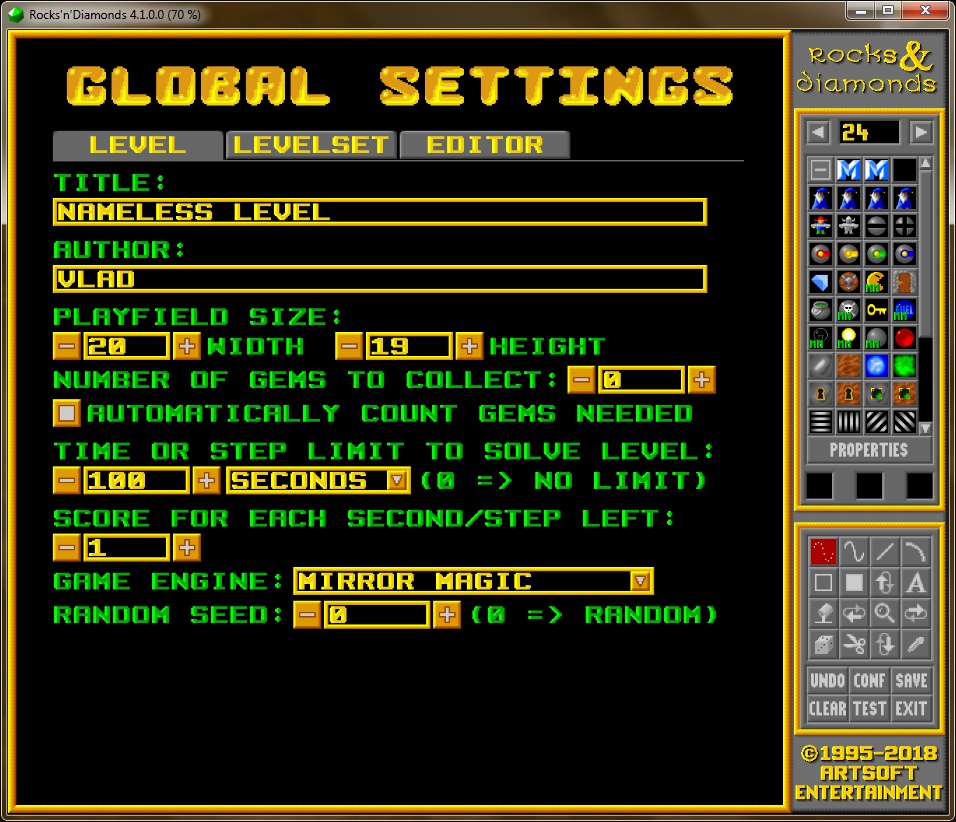 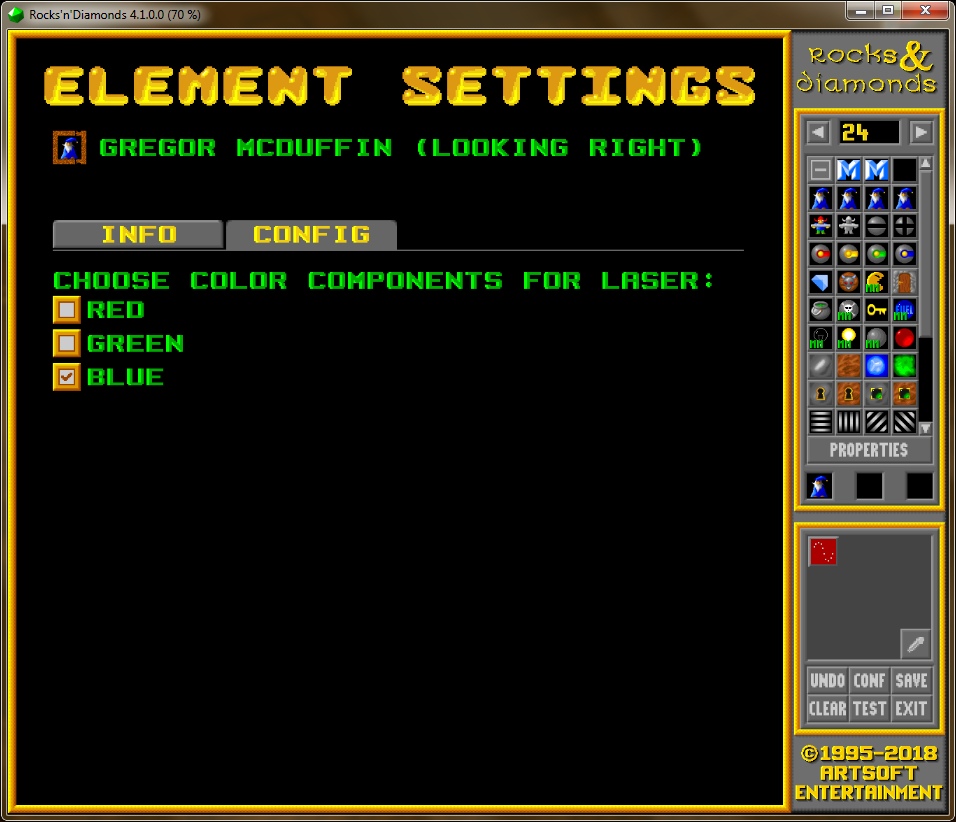 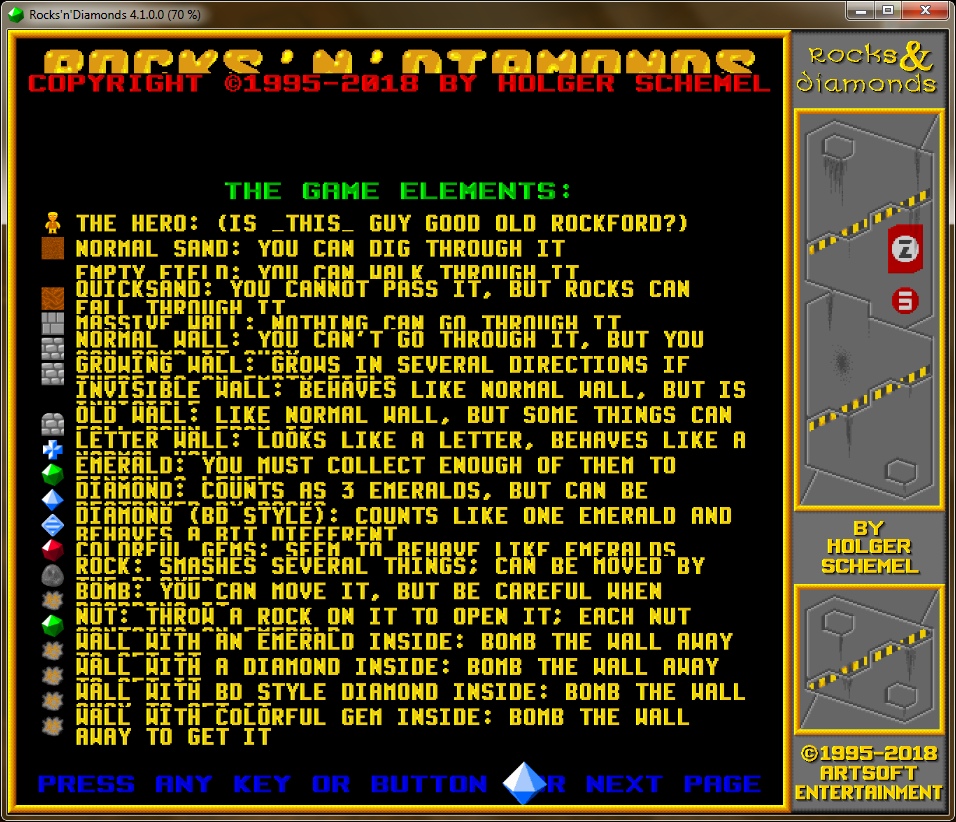 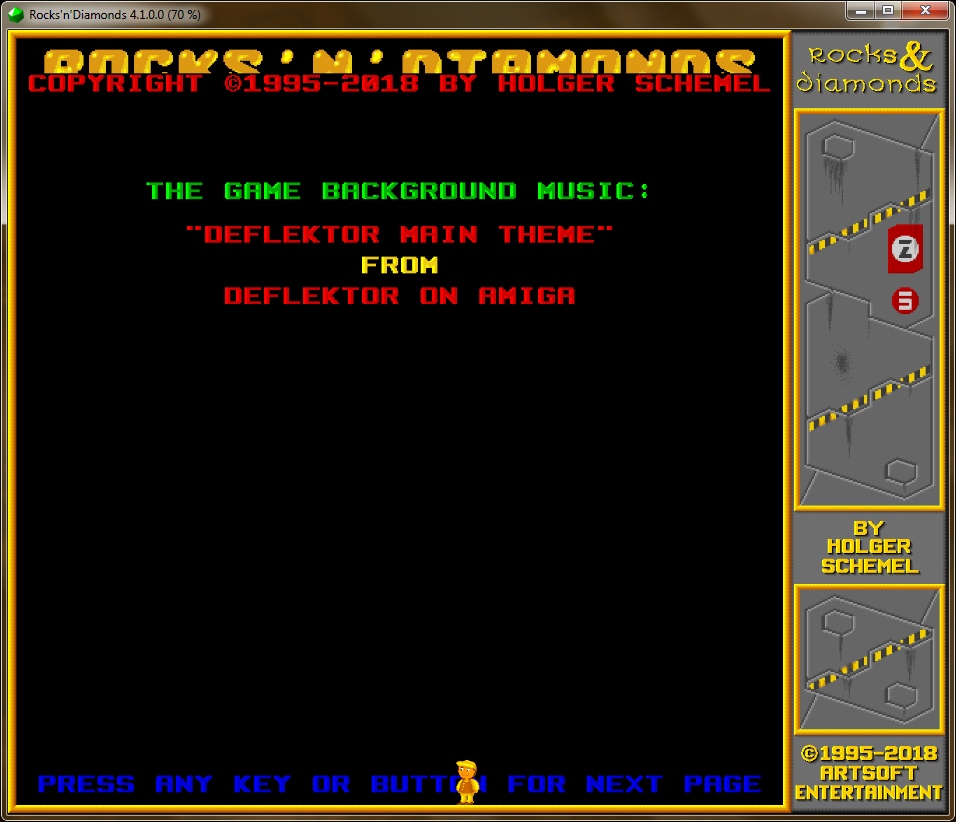 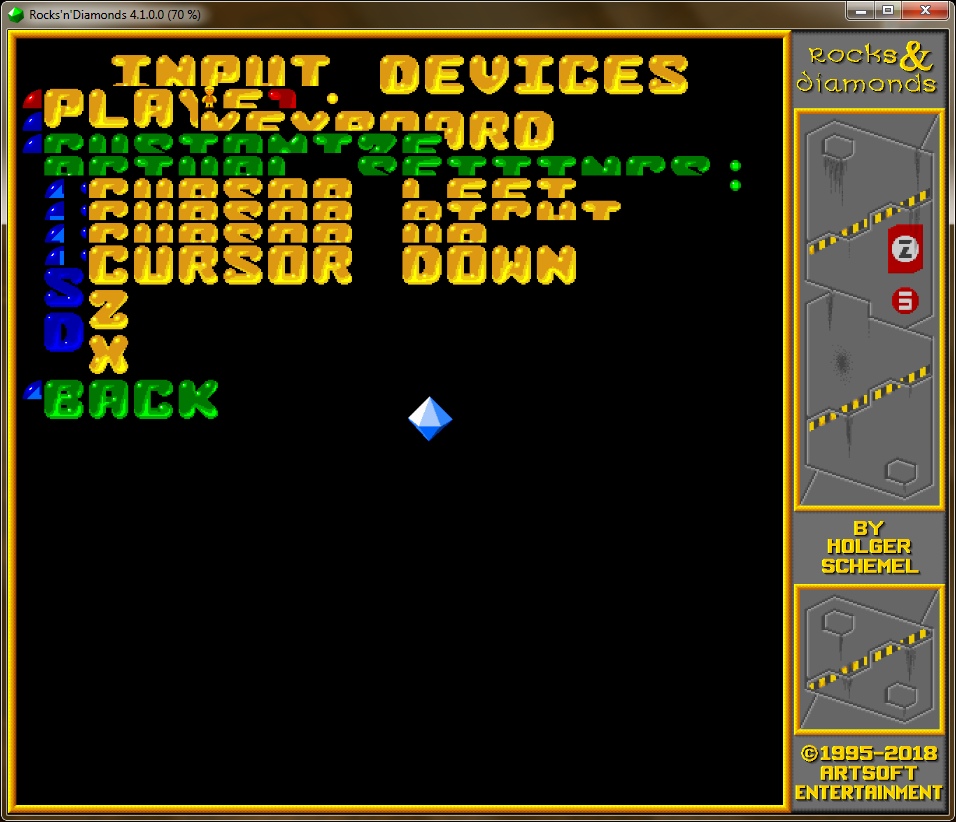 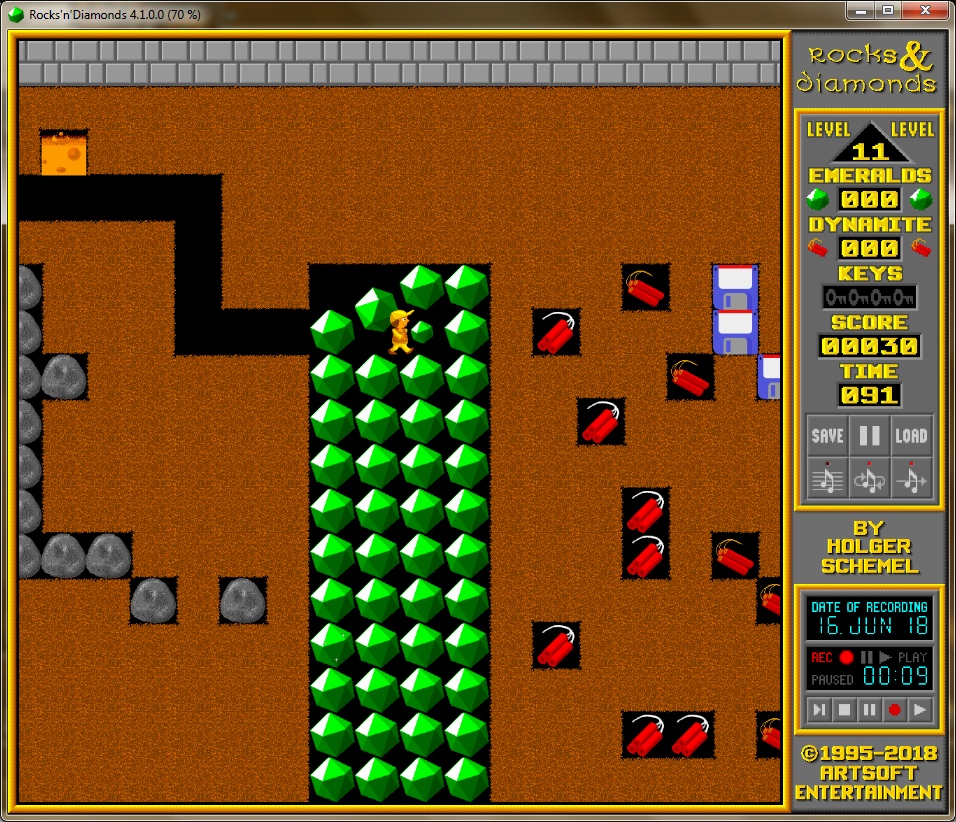 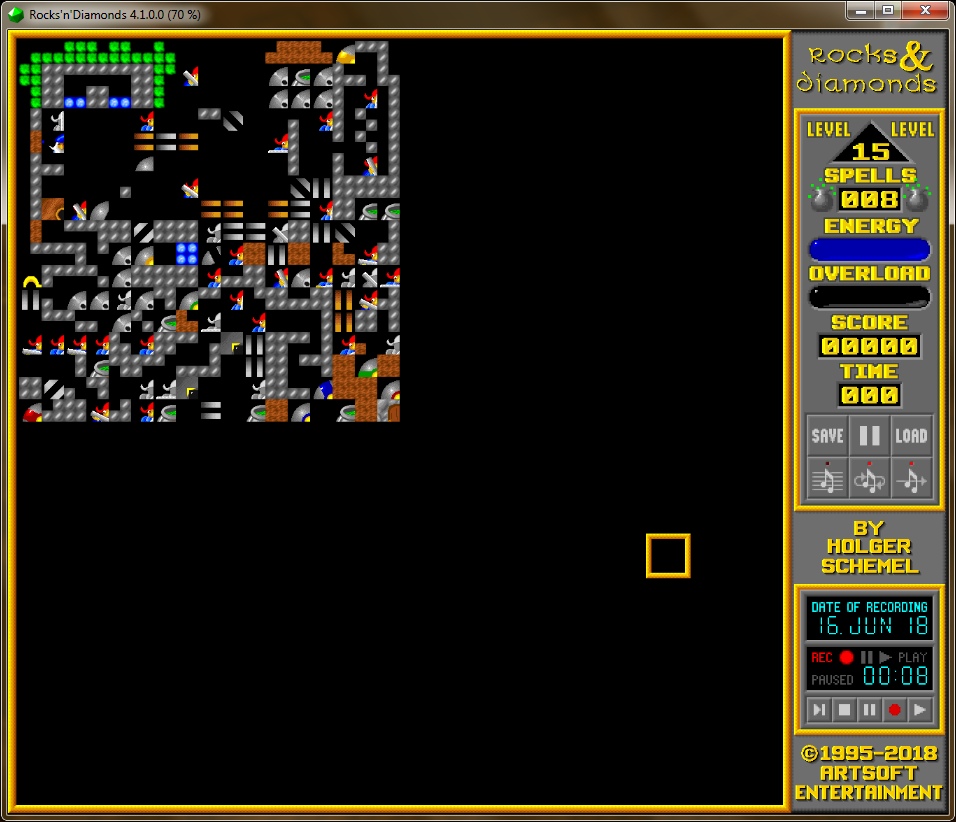 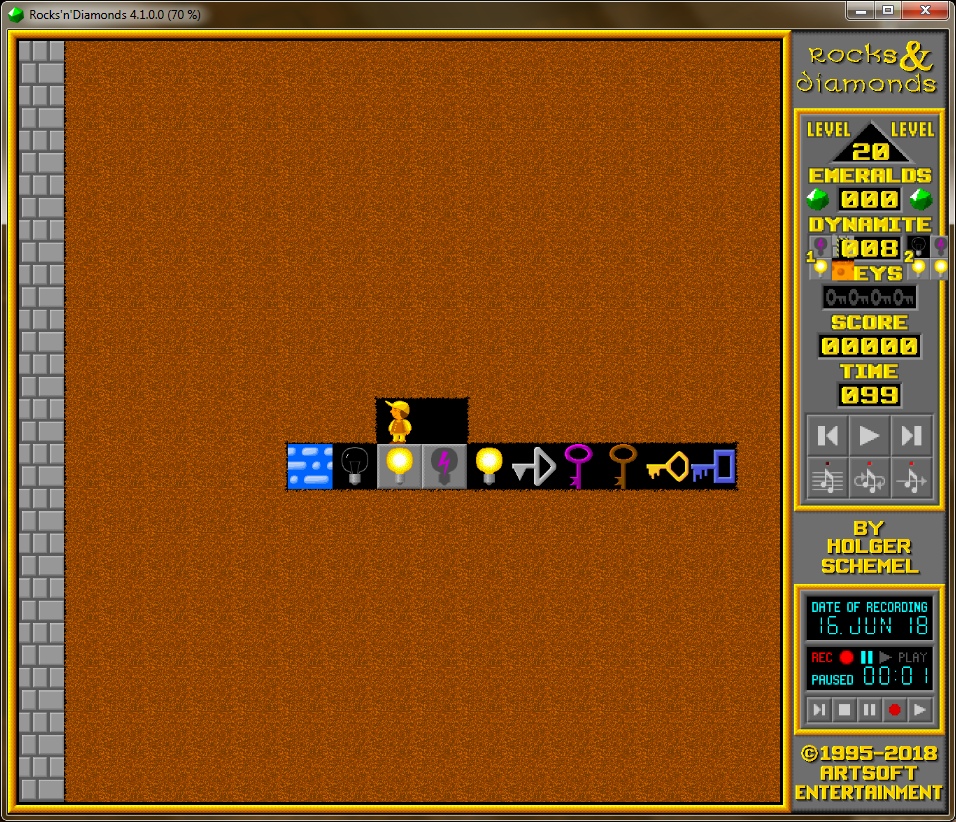 Here's another progress report (actually, it was intended to be combined with the previous one that I wrote few days ago).
I made it kind of like "be moddable" - there're few "mods" that changes the visual elements like... remember my pretty innovative (for that time) Widescreen mode (800x560)? So, R'n'D 64 will contain the new Widescreen 1600x1120 mode as that "mod". And same for my other visual graphic elements I made earlier: Flipped Border, 2 last inventory elements, Show Keys (all 9 keys on the interface), EM-styled 5-8 EMC keys, MM-engine interface tweak and even some mods I didn't make before. And it will also contain Mirror Magic screen as one of those mods. And some mods will even be combinable (Of course not all of them just because few ones that affects the same element can't be combined without issues).
Screenshots:
Widescreen combined with 2 last elements in inventory 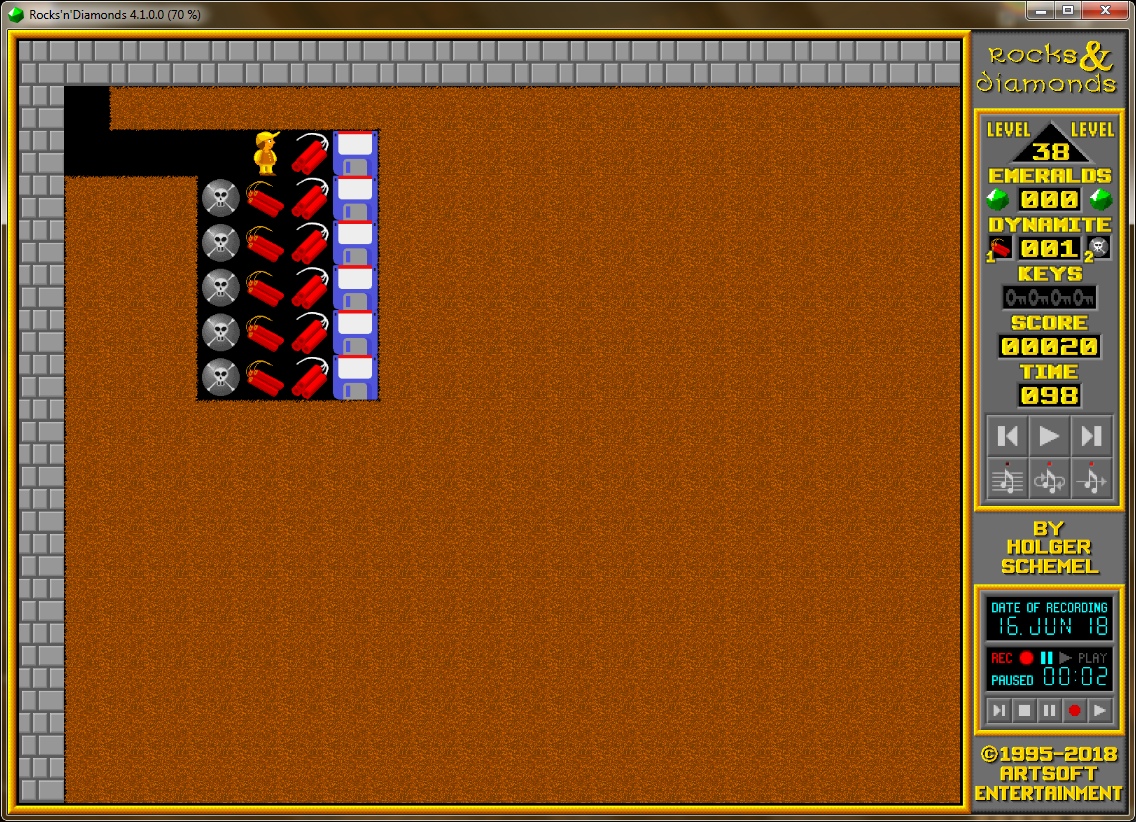 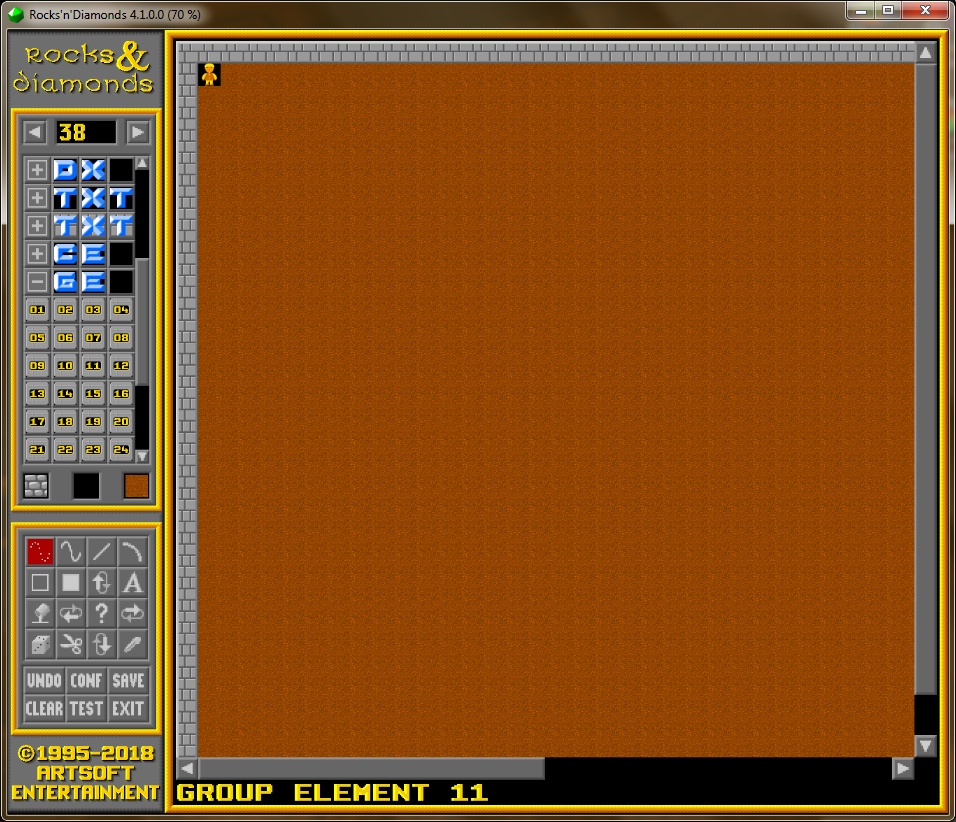 Flipped border combined with 9 keys on the panel 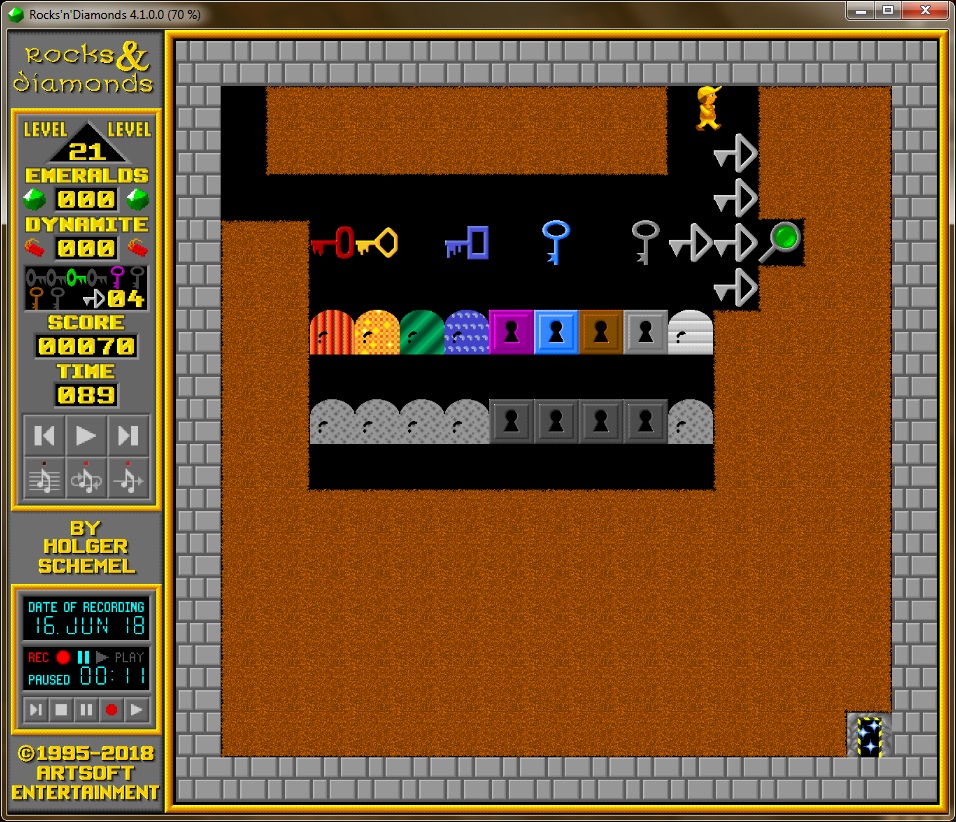 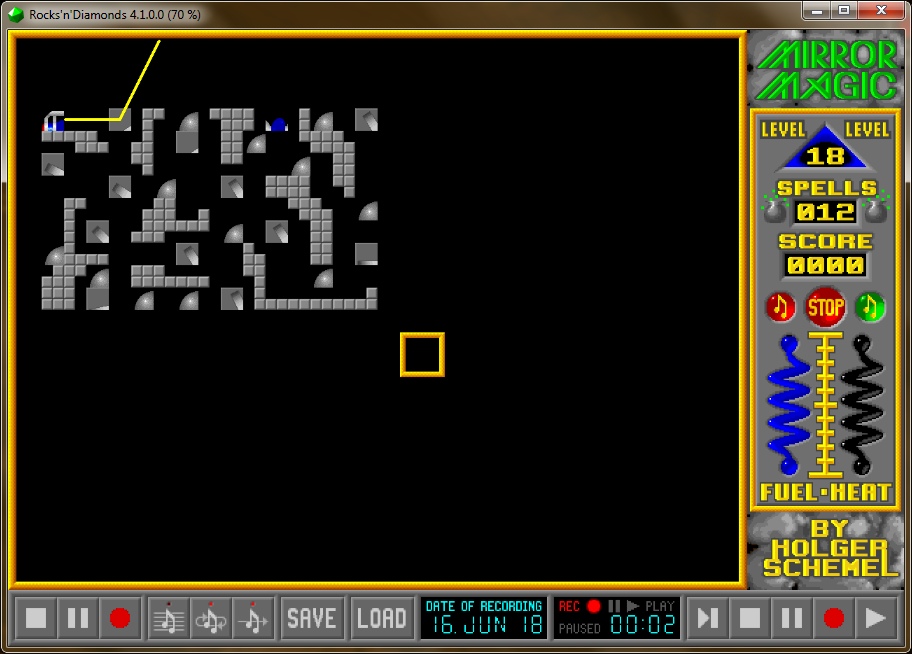 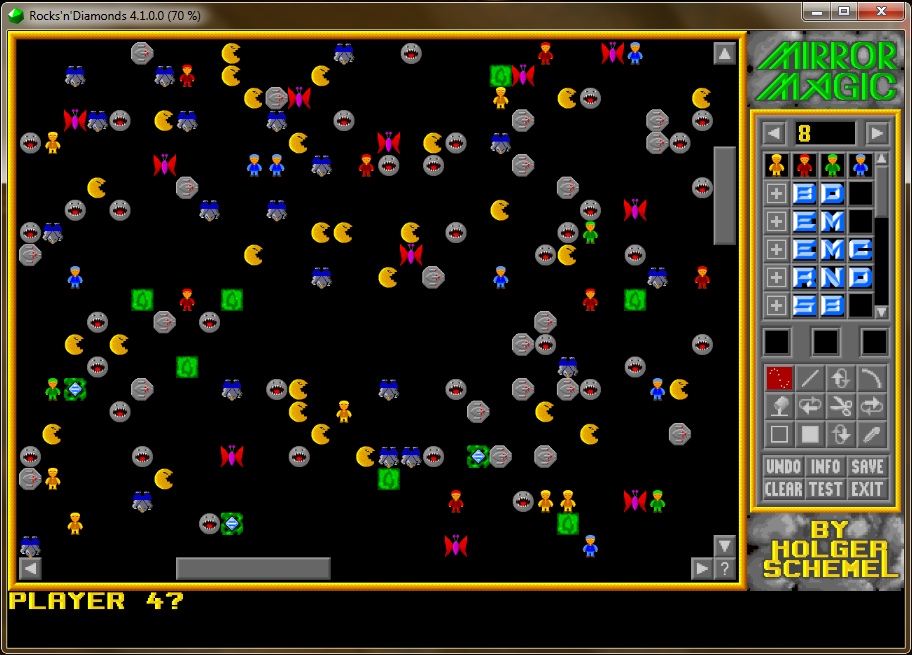 Plans on some other mods:
Hero (Rockford) over McDuffin's gnomes
Players' Christmas outfit
Maybe "original names from the older versions of R'n'D" (like Crunchers instead of Yam-Yams but I'm not sure)
Nothing in here...*
Top
Post Reply
21 posts